Mirabel and Viktor are the Assault hero of Novus, unlocked by the Nanotech Branch. They move slowly over short distances, but activate boosters to move rapidly over longer spans and cross water. Their rifle attacks air and ground. It is strong against infantry, heroes, Walkers, and Masari Dark Matter Armor.


When arriving on earth, Mirabel showed a desire to defend the humans. 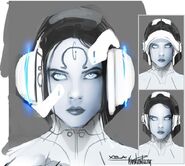 Retrieved from "https://universeatwar.fandom.com/wiki/Mirabel_and_Viktor?oldid=4527"
Community content is available under CC-BY-SA unless otherwise noted.